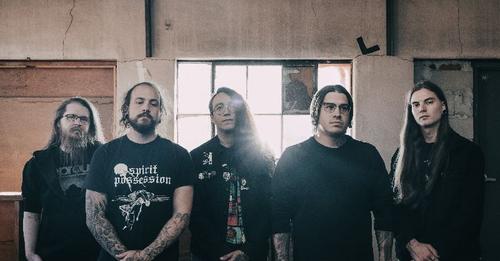 One of my personal big discoveries in 2022 was “All We’ve Lost We Carry With Us“, by Colorado band Saeva. The work is a heavy, dream-filled masterpiece which walks a strange and dangerous line between bliss, and destruction. A stew of metallic varieties and influences. An aesthetic that that is as colorful, as it is worrisome. We recently reached out to Nicolas from the band to have a chat, specifically because it looks like something very exciting is in the works!

Social media posts, short videos and recent snippets from the band, are of recording sessions for a new album some time soon. The temptation to learn more was just too strong!

Hi Nicolas! Well firstly, thank you for not making us wait too long for a follow up release! Is it presumptuous of me to think that your new recordings will be out some time soon? How long do you imagine they will remain in the zone of dark-alchemy and post-production? Are you working to a strict timeline over there, or just going with the flow and not too stressed about when the public will be able to feast?

Ivan, thanks for having me and for all the kind words about the last record! I appreciate you taking the time to reach out about the new material. In an ideal world I’d put this record out as soon as it’s done, but if I learned anything from the last release, it took us a year to bring it to the public. I have a lot of high hopes for this one, including proper promotion/PR, videos and trying to reach a larger audience. We also have done a lot of crowdfunding to make this record happen and we want to find a way to show our appreciation to the fans, friends and family who have donated (names in the album notes, early listening party are just a few ideas).

We have grown our relationship with our photographer, Cameron Martinez. He just produced a brilliant music video for the song ‘Low’ from our last record. So, I am in the process of working with him in developing a series of videos to accompany the release of album 2.

Right now, there’s no strict time-lines, but I want to work in a way that respects the time and support of folks who’ve donated and that doesn’t feel back breaking. Principal tracking should be completed by January/February, and we’ve booked time to mix in March. We started at the beginning of December.

Compared to your recording sessions for “All We’ve Lost We Carry With Us”, what is different for you and the band this time around? I’m curious what joys, lessons, disappointments, challenges and methods you might have experienced when making that first album, and what is different when one re-enters the pressured world of laying down tracks again? Thematically and stylistically too, are we looking at a continuation or evolution of “All We’ve Lost We Carry With Us”? Will the albums be connected in some way? Or is your new work going to hit us in a blindspot with something totally unexpected?

So, I think once you hear this record there will be a clear understanding of whats going on. Initially, I had envisioned this album being a continuation of “All We’ve Lost…” and in a lot of ways it is. It’s the next step in processing the grief. I think what we’ve learned, is how to be a lot more picky in the studio, and where we tracked the last one in 4 days, we’re taking our time now. In another ways, it’s an evolution because there’s clear growth for us in this record. I’ve grown as a song writer, and we’ve grown as musicians in the studio setting. I think there should be some pleasant surprises along way for fans of our last release, but enough new to still excite folks. Visually, we’ve continued to work with UK artist, Mark Facey, for this album and from. What I’ve seen the art work is stunning. I thought I knew what I wanted and he showed up with something else, used the colours I told him to to avoid and he heard the heart of the album and turned it into a magnificent piece of art.

I see that you’re engaging a really nice looking studio and a friendly engineer to do the recent recording work. How has that been for you and the band? What surprises have you had along the way?

Pete De Boer is who we did the last record with! He’s a brilliant engineer who worked with Ron St Germain for a long time and has decades of experience in making great sounding records. When I met him I told him I didn’t want to make another “metal record” I wanted to make something that sounded great… And he nailed it the first time. He saw the vision, almost more than I did.

The biggest change on this record was that we developed a friendship with Pete over the last two years and I told him what I really wanted was him to take the time to produce and play with our songs. He has an amazing intuition and ear, so basically I brought him my songs and let him go to work!

I think we all have felt a lot of pressure on this record, the songs are harder on many ways, the recording is more detailed, and we have an additional “member” behind the studio desk. I think my favorite moment so far was tracking drums. Getting to really try new things and experiment with sounds, beaters, mallets, cymbals and everything to make every song unique. I’m really excited to hear how it all comes together with the mix and I’m eager to get this into the hands of our amazing fans.

Thank you for taking the time to ask us questions, we have always appreciated the support that you and darkstereo.com have shown us!