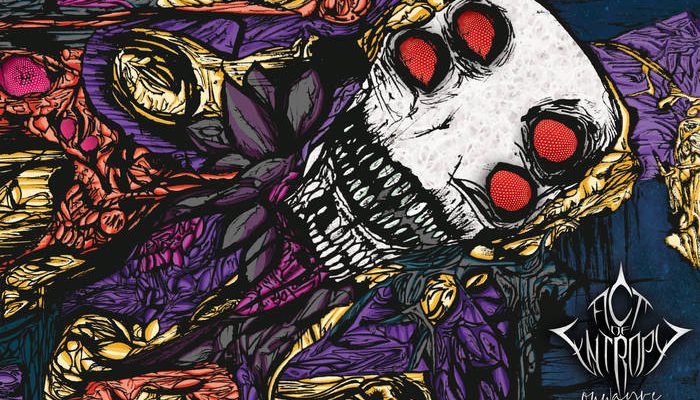 Earlier in the year we spent quite some time exploring a range of progressive metal and experimental music communities online. Within these discoveries in social media, we came upon a true gem. A diamond in a dark sea. Facebook’s Avant-garde & Prog Metal group. Unlike many others, this community is full of engagement, listeners, fans, artists and devotees of a wide-ranging spread of genres. It was a true pleasure meeting these people, finding new music, and connecting with lovers of music’s extreme ends around the world.

One of the admins (Pan Inentropy) is a most supportive, friendly and energetic individual who works with his team to assemble playlists, topic libraries, new releases, recommendations, and genre charts specific to decades.

Act of Entropy (of which Pan is one half of) describes itself as avant-garde black metal meets jazz, that freely infests itself with dripping psychedelic noise and deathened undulations. A two person endeavor their latest release is “Ouwayre“, four tracks of strange haunting ambience, cacophony and distorted guitar. It is both disturbing, and beautiful. A sensory overload, yet filled with meaningfulness. For lovers of the experimental, extreme and noise-related forms of music, it comes highly recommended!

We took some time to chat with Pan and Eri, and ask them a little more about their work.

How long have you been listening to avant-garde music, and what led you to discovering it? Please also tell us a little about where you are from, the local music culture, and how Act of Entropy started.

Pan: I’ve been listening to avant-garde music for as long as I can remember. There isn’t too much I won’t listen to which helps me find a lot of interesting new music very easily… This is probably what helped me discover it in the first place, not having any particular sonic bias (if that’s the correct phrasing, with one or two exceptions) and the more strange stuff just sticks and speaks to me more. That being said, I’m not gonna sit down and listen to some guy fart on a snare drum and pretend that they’re doing anything wow-ish.

Eri: I’m pretty much the same way. I listen to a myriad of genres but the really stand out artists just stick with me more, and they tend to be the ones I find that are more unusual (in most cases… not all). I think I got into that type of music because I just want to listen to music that is interesting. We’re a duo from the UK (currently in Hertfordshire). In regard to the local music culture, I’m not too sure how to answer that since it’s an interesting concept to consider in this technological time as to what local is.

Pan: I’m not aware of any musical endeavors within the town where we live, so local for us becomes a bigger conception. The UK as a whole, well there is a great metal scene here for sure, especially for extreme stuff and there’s more than enough experimental electronic stuff too. Some decent jazz as well, the only issue is that you usually have to be in-the-know to find them.

Eri: I don’t think musical cultures vary too much, “scenes” tend to mimic themselves with slight variations as you move out from your own location, but I’d say scenes are probably more “international” now.

Pan: It’s a quiet town where we’re from. There’s like one high street that has most of the of stores and the rest are residential buildings. A lot of wildlife rears its head from time to time here… I’ve seen foxes, deer, pheasants and badgers etc just roaming the sidewalk sometimes too (at night), if that helps paint a clearer picture.

We started Act of Entropy in 2017. We decided we wanted to try something a little different so we began trying to pinpoint our style by working out how to bring certain styles (that we love) together, with general experimentation to see what sounded right to us and what didn’t, so last year we managed to nail the sound that we were looking for. It just sounded right. There isn’t really a glamorous story behind our formation, we could always make one up though and fill it with supernatural stuff lol.

I can kind of relate to the living in a small community aspect! Here in Canberra were are treated to a fair bit of bushland wildlife too. It is great to hear your appreciation of animals, and learn a little bit more about where you are both residing. A vast majority of my extended family is splattered around the UK, and one day in the future I’d love to see more of your country!

So, back to your album. For the writing of “Ouwayre”, (or your work in general), what is your creative process? What role do you both play in the recording and production journey? I’m curious what an average day/evening/hour in the studio looks like. Do you enter a new phase of recording with the whole concept and theme for an album planned out? Or do you work more organically and let the creations dictate their ultimate fate?

Eri: I have/had family over there, and have some in New Zealand. Think I’d like to see some of Australia and New Zealand.

Pan: I’m quite interested in Australian wildlife. There are some amazing insects and arachnids over there that I’d like to get up close to.

Eri: We pick a larger concept and split it into 2-4 “sub-concepts.” In the instance of Ouwayre (from a writing perspective) it is actually part one of a trilogy BUT… each part can stand alone, and should outside of that collective identity. (You wouldn’t need to hear one to get the other). We’ll spend a few conversations saying this is the idea we want to portray and then we start thinking perspective. We consider the concept as though we are part of it and looking at it in some unique way, rather than attempting to cover “broader issues” and this is before we’ve even done a single note. I guess we imagine a rough soundtrack of sorts. The writing process begins with me. I provide the skeleton of the track and sonically visualize and just let the flow see where it goes.

Pan: I will then sit down and listen to what Eri has done and it will take a few days (or weeks) of listening. I don’t pick up an instrument at all in this phase. I write out everything in my head (on paper), and when I’m happy that I’ve got 80-90% of it down I start my part of the recording process. That part is mostly “organic” in the sense that I’ll hit upon 3 or 4 things to expand upon.

Anything that doesn’t work (when recording) is usually fleshed out on the spot. There will come a point when we both go at it, adding layer upon layer (some of it is predetermined but it wouldn’t have been added it in yet); kind of like a mini orchestra maybe? In a considerate way that helps build a sense the dynamics in the arrangements

Eri: We’ll be adding in things that we think will complement our sonic expectations too… we have an idea that we adhere to.

Pan: I would say that we both know when too much is too much and when there isn’t enough of something, and that’s probably the key to our writing and the interplay between us.

Your first release on bandcamp is Nihilo from early 2019. Was this the first release you worked on together? Now that you’ve got four 4-track albums out, what has changed for you in the way you approach creating music? Just curious about what’s changed and developed for you during this time. Also, what were you up to musically, prior to Nihilo?

Eri: This is my first personal musical endeavor in regards to recording something and putting it out there. I’ve definitely become more comfortable and I would like to say “more efficient” in regards to my bits, and yes, it was the first. Musically prior to Nihilo, I guess you could say I was learning, but really does a musician ever stop learning? Probably not.

Pan: I’d been in two other projects prior to this, both of them blackened death metal. Did the whole tour thing, played alongside some big names etc. I don’t want to speak ill of them; at the same time, I’ve become more musically curious about concocting new things from various blends of bits and bob from here and there. I think I learned quickly that I enjoyed the writing process more than the performing aspect. The first one we (Act of Entropy) did was really just feeling out what we could do. In regards to Act of Entropy, we didn’t really hit the formula until Abyssal Esurience I reckon.

Eri: Yeah… I’d say that Abyssal Esurience pretty much consolidated what we’d like to do,  at least under the Act of Entropy banner.

Pan: I’ve become lot more comfortable exploring ideas in my mind and in practice. You’ll notice the transitions between Harbinger and Abyssal. I’d say that I’ve become more “carefree” in my approach to writing. Sometimes if I really want something in there, “I’ll make it work…” But in truth the whole writing process is rather unconstrained and lucid at the same time, our ability to make things sound more cohesive has improved, I think this comes from reflecting on what you’ve done and being able to take steps outside your comfort zone. I think Eri would agree.

Eri: Maybe something in the individual approaches to “our own primary bits” has changed, but the writing/recording pattern hasn’t changed. It just comes down to imagination in the end and being able to translate your idea. I’ll sometimes hum and record myself if a spontaneous idea comes to me on my mp3 player, even if it just me humming something.

Pan: I’ll personally write down the idea somewhere and keep it, there’s like a pad that probably has over 200 ideas lurking there. Some of them are just silly though but I keep them anyways.

A pad full of ideas, spontaneous throughs and recordings, it sounds like a wonderful way to work! So I have to ask, what’s next for you both? Are there more recordings in the works? What can we expect from you in 2022?

Eri: Ouwayre was intended as part one of a trilogy, so writing for “Ouwayre 2” will start next year at some point, but we don’t have a scheduled time frame for this release, could be anytime late 2022-early 2023.

Pan: There’s a separate project in consideration for writing, most likely sometime in 2022 if followed up (there’s factors at play that will determine this). So, looking at it like a checklist, there are the split releases, a separate project (which won’t sound like Act of Entropy), and Ouwayre II… maybe something else too.

Act of Entropy: We’re like to publicly say thanks to Ivan and Dawn Industry for getting at us to do this interview!

Thanks Pan and Eri! We really appreciate your time to have a chat and let us learn more about you!