Darkstereo Compilation – A Decade Would Be Too Long

Interview with The Idiot Flesh

Sleeplab’s to the forest to the end 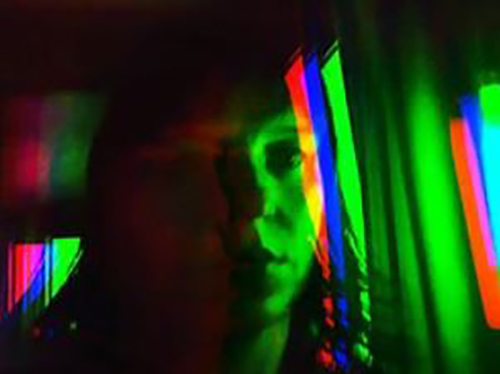 In a former life, I had the great pleasure of meeting Marita of Symmetrix at numerous Melbourne live electronic music events. A fellow solo artist, I always appreciated the work that goes into crafting and ultimately delivering music in both a live and recorded context.

Continuing the theme with our 2DCAT interview, a retreat from progressive metal into electronica, it seemed a great time to write about one of her albums, “Being There“. Now, this isn’t her latest work (2018), but this release really caught onto me sonically for some reason. The CD is a treasured part of our recent spout of “collecting”.

As a whole the work feels like scales continually re-weighting, swinging left and right. Flowing between optimism and strength as well as darker shades of cynicism. Perhaps the first track “Inception” sets up this theme, “pulls you up and pulls you down”. Indeed there is both light and fun, equally balanced with melancholy through the work. Observations, self-analysis and personal perspectives.

Synthesis drives along through bass lines and some lovely arpeggiation in this album. Marita’s vocal work is also outstanding. The use of effects is minimal, so her tone can be appreciated very clearly in its wonderfully mixed delivery. Although much of the album draws upon synths and Marita’s vocal work, there are other influences at work here in the background too. Delayed pianos, shoegaze guitar drifting in from time to time, flavors of indie pop greet you nd then gently wave goodbye as the tracks progress.

Marita, thanks for letting us write about this great piece of work! I’d like to know more about where you draw inspiration from?

If you are talking lyric-wise, I always seem to draw inspiration from relationships, both good and bad, be it either romantic or personal friendships or even experiences with work colleagues. I also draw experience from other people’s lives, be it friends or family and often mix their stories in with mine in lyrics.

A lot of the material feels very personal. Also, what is the history of Symmetrix?

Yes, the material is definitely personal, sometimes I wish I could write songs about something other than relationships lol, but I always seem to veer towards this topic. I started making music under the name Symmetrix back in 2013. I had been planning the idea of creating an electronic music project for about 5 years before I finally started to make it a reality with some tracks and a Soundcloud page in 2013. From there it started to ‘grow legs’ so to speak and the following year I started doing gigs around Melbourne.

What drew you to electronic music mixed with other guitar-based genres?

I was a massive fan of 90’s rock/grunge music.  I was very into Hole, Nirvana, Sonic Youth, Soundgarden, The Pixies, I discovered Black Sabbath through these bands as a lot of these bands said that they were an influence on them, and I really got into them, still a huge Sabbath fan today (the Ozzy years only). I was also into the shoegaze bands from the UK like Swervedriver and My Bloody Valentine, I really loved what they were doing guitar-wise, using sampled sounds with distorted and detuned guitars, but at the same time, having this poppy element to their music that I just thought was so cool and I wanted to replicate in some way in my own music.

As a child I always loved synthpop bands like Depeche Mode, The Human League, Gary Numan, New Order and Devo. But I think I went through a stage when I was into 90’s grunge where I thought it was a bit uncool to like that sort of music and secretly still loved and listened to these bands, mind you, I don’t think Depeche Mode has ever been uncool in my eyes, I think they’re an incredible band, always making music and reinventing themselves, I remember buying ‘Violator’ on cassette tape and playing that tape to death, such a brilliant album in my opinion. I think as time went on and the whole ‘grunge thing’ died off, I realised that really, I can like whatever I want, even if it’s daggy to others, I mean, really who cares?  So, as far as what drew me to electronic music mixed with guitar-based genres, I would say it was the combination of all those influences that I grew up with and discovered along the way.

What other artists do you enjoy listening to?

These days I am listening to a lot of Synthwave music, I like The Midnight, Electric Youth, Dance with the Dead, Gunship and this year I discovered a band call The Bad Dreamers who I am loving atm. I also still enjoy listening to My Bloody Valentine and I have also been getting into the Cocteau Twins again.

Having released other tracks since the “Being There” album, (Simple World, Night Falls, Confide), what is your plan for 2022? Are you working on an album or EP? Or focusing on singles? We’re curious about what your next creation might be, so if there’s anything you can share about it, that would be great!

I have a lot of half–written tracks lying around that I am hoping to finish in the New Year.  I have been experimenting with more synthesizer sounds in my music and want to explore more of that sound in my future music, so hopefully, I will stop procrastinating and create some new songs soon! Watch this space!

Attention Recording Artists!!! Darkstereo is organising a compilation album of works dark, melancholic, atmospheric, or otherwise underground in flavor. Visit the link to learn more and register your interest in the project :-)darkstereo.com/darkstereo-compilation-a-decade-would-be-too-long/ ... See MoreSee Less

It is coming up to 9 years since a Dawn Industry project released its last music compilation. Back then, Darkstereo was a side project of DEMUS, and a lot has...
View on Facebook
· Share