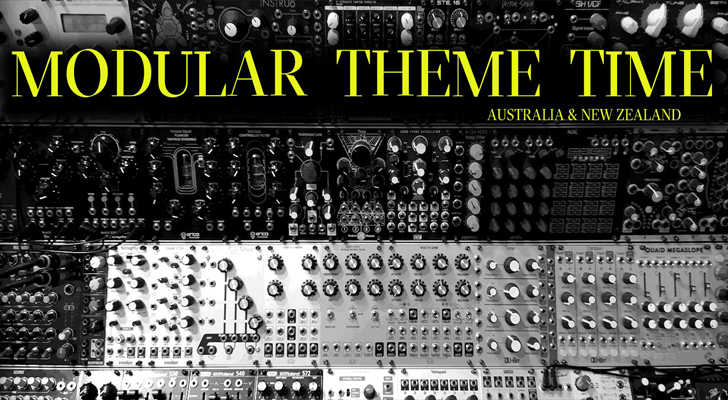 Recently I had the great pleasure of joining an online community of musicians from Australia and New Zealand, Modular Theme Time, who specialize in modular synthesis. All this came about because of one Mr. Rachele.

In all honesty, my previous exposure to modular synthesizers was limited to some of the incredible gear brought to Enzyme events over the years. Abre Ojos springs to mind, with patchcable-connected rumbling drone sounds, working in sync with colorful and geometric projected visuals. Some semi-modular tools could be witnessed around the traps too, like the odd MS20 or Moog, or sets of other interconnected gizmos making a celebration of glitch.

In a time when so many electronic musicians deploy software to craft their sounds, or buy something off-the-shelf and get down to reshaping presets, there is a mysterious gratification and tactile feel that must come from truly shaping hardware to be your own.

Mr. Rachele and his colleagues assemble instruments from what are usually Eurorack components, and then hand-patch oscillators, amplifiers, envelope generators, filters and all manner of other knob-infested goodies together. No doubt, the end result is a personalised instrument, a lot of experimentation, and a satisfaction that comes from not only making sounds, but also in combining and altering the circuitry to deliver them.

On a regular basis, Modular Theme Time joins as a collective. Beginning as live sessions, they moved to online file-sharing in an effort to continue their work through the current pandemic, these works titled “Shareware Sessions. For each, a theme is chosen and the crew gets to work recording and building up layers of sound together. These works are then released on BandCamp for public enjoyment. As I write, I’ve fired up a session themed “Isolated Sounds in a Minor Key”. There is dark ambience here with a machine-like alarm drone in the distance, high pitched twitches overhead, and some extremely warm pads coating the whole thing in a sense of luxury. Further into the release there are some more arpeggiated-style melodies, gentle scraping, and “danceable” beating, all strangely relaxing and captivating to absorb.

There are no less than nine sessions worth of themed audio currently available, and we look forward to exploring the rest of the catalog!

All this brings me to back to Mr. Rachele, who also records and releases solo works at his BandCamp site. There is a real focus on hardware here, where modular synths and drum machines bring minimal, yet surprisingly complex art to life. His latest album “All One” feels like a futuristic piece of dance floor science fiction. Another release, “Change” captured me with robotic dark ambience, uplifting beats and gentle sparsely placed vocals, finishing off with what felt like synthesized sounds from the natural world. This all led me to probing a little deeper, and asking Mr. Rachele what had inspired him to work with Eurorack builds. His response is below:

“When I finally got back into music production after a decade, I was wondering what to start that journey off with. I still had my RS7000 and RM1X groovboxes from the early days, but needed to move on from mangling presets sounds and rhythms. The Elektron Machinedrum was always something I had lusted after but could never afford. After such a long layaway I now had enough cash to buy such a machine. But there was so much more quality gear out there now. What to get?

I was at the pub with some friends and family, and had recently met a pair of electronic music producers through my wife’s cousin, both which were at the same venue that day. Happening to get their attention, I sought some advice on what piece of gear I should purchase. I let them know my budget and my desire for a Machinedrum. Andy said he would get the Octatrack, and gave me a rather convincing and long-winded explanation. Casey, told me to get into modular, and did not say much more. Andy retorted “don’t get into modular, all he does with that is make noise”. I did not end up listening to either of them, and purchased the Elektron Rytm (thought it was the upgrade of the Machinedrum. It is not! I should know, I have a Machinedrum and will never let it go).

So time passes and I join Music Gear Nuts on Facebook, to keep my eye out for audio gear bargains. I keep seeing these Mutable Instruments items come up. Eventually they peak my interest and some research begins. I find YouTube videos that show how musical and beautiful these things sound. And it’s Eurorack! Hey, wait a moment. They do not just make noise!

I contacted Casey and asked him about Eurorack. I asked for a few tips on what I needed, then did some research on YouTube and away I went. Purchased my first 6U 84hp case back in August 2016. Two and a half years later I had my monster case built housing 24U 197hp. I still own that case, and have a 12U 104hp Amalgamod portable case, and stopped there. Every addiction needs a limit.

I love the fact that I got into Eurorack. Not just for the format, but for the people I have met. It has been the most welcoming and non competitive part of the music scene that I have witnessed. I always hated how bands and DJ’s were very arrogant and protective of their territories. Here I was thinking that these forms of music (metal and techno) were full of people with open minds. Which on the whole is very true, but it’s mostly the punters. Those playing and organizing had a protective arrogant manner about them. Very odd I found it, and was part of the reason I left the whole music production business behind many moons ago.

The Eurorack community is very different. Maybe because it is so young and on the rise in popularity. So, I am doing my best to make those that are new to euro and modular synthesis, feel welcome and part of the community. Build a place where we support each other, not just because that is who we know or are friends with, but because we are a community of like-minded people. And we are here to learn and have fun. That is what MTT is all about. You don’t have to be an expert to join in and make a sound. And if you need some help, we are here to advise and guide you.”

Thank You, Mr. Rachele for taking the time to reach out, and giving us a glimpse of what modular synths and collaboration can truly achieve!

The draft Darkstereo compilation album link has been emailed to all contributors. Please check your tracks (and my spelling) <3 ... See MoreSee Less