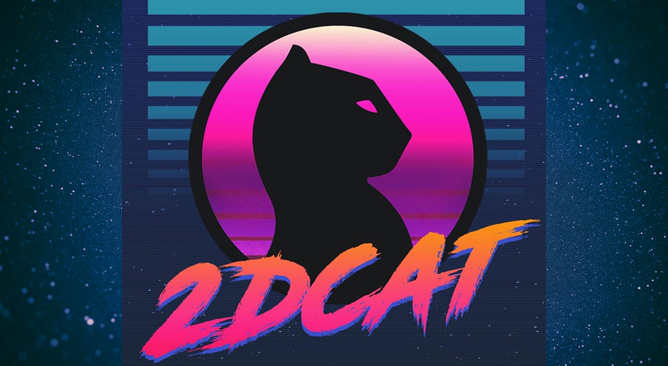 There are times when one assesses personal and key moments of the past, and how they’ve effected one’s creative future. One such time for us many a year ago, was meeting Johan Hauck in Japan. A fellow musician trapped in a strange land. We took this recent opportunity to catch up with him and discuss his new work in the amazing synthwave trio, 2DCAT.

It has been a long time since the days of the Trucido EBM project which was born in Tokyo during the early 2000’s. What have you been up to since then?

This question makes me feel so old! Has it really been 20 years? Do you remember when we picked up a 1x CD burner and would press “burn” and then just head out to the club for the night waiting for it to burn? It’s amazing how much technology has progressed over these last 20 years!

I basically gave up on music for around 15 years, after I left Tokyo. During that time period, I became an electrical engineer and got super-into tearing apart vintage synthesizers, understanding them, and then building modern recreations of hardware in FPGAs (although back in the early 2000s, I was porting to DSPs). Other than that, it’s mostly been travel, surfing/bodyboarding, hanging out with cats, drinking good booze/bartending-because-it’s-fun, and video games.

When did you establish 2DCAT, and what led you to commencing a new project which is so wildly different to your previous work?

A good friend of mine and I got rather upset with the current state of server architecture in MMORPGs. We were advising a couple of companies on optimization stuff, and then just decided to branch off and test a bunch of stuff on our own. Even though there were two of us on the project, and we knew what we were working on would never release, we both had fun building a dumb, massively complicated MMORPG. In the 6-12 months or so we were messing around, the near entirety of devs who saw what we were working on thought we had this large dev team behind us… but nope, just a couple of dumb electrical engineers doing maths. It came to a point where we needed to have some music in the game for loading screens and atmosphere. I remember my friend reaching out to some synthwave bands and they wanted incredibly large sums of money. I chimed in and said I used to do music 15 years ago and offered to do some synthwave stuff. That process was fun and morphed into what I’m doing today.

Who else is in the group, can you tell us a little about yourself and your fellow band members?

2DCAT consists of myself, Chloe and Ulf. Chloe is a Kiwi from New Zealand who assists in vocals and Ulf is a Swede I met in the bartending scene, who assists with lead guitar. Between the three of us, we can make you the best cocktail you’ve ever had and talk to you for days regarding what liquors are the best, for whatever purpose, and why. We’re all nerds in that area.

It is so wonderful that the need for music for a game project, led you down a road back into recording and producing! You’ve obviously done a lot of work on 2DCAT at many levels, the wonderful and thematic artwork, the wide range of releases and whole vibe you’ve attached to the project.

Where do you get your inspiration from for 2DCAT? It is a strange blend of “the modern” and also “nostalgia”, all done with a very fun, inclusive and meaningful undertone.

It’s interesting that you mention the thematic artwork, as a lot of it has been collaborations between myself and friends the somethingawful.com forums. I’d say largely that the music and tone is somewhat ironic. I look around at what’s going on in the world today and it’s hard not to come away with the feeling that that we’re on the path to societal collapse. Part of the music is nostalgic, and the remembering of a time when it didn’t feel like we were on the break of a collapse. Well, maybe I should re-frame that – remembering a time when I was too ignorant, sheltered, and naïve to recognize what was going on around me. A lot of the visuals are also inspired by suprematism and constructivism, and this form of arts is a great inspiration for me. Some of the inspiration is embracing the “lol and lmao; nothing matters” mentality – recognizing that at an individual level, we are unable to perform any meaningful change and just acceptthe madness. A couple of the releases were political in nature, used to support underdog candidates that were trying to change things for the better.

I have to ask, what is your “go to” equipment for recording these days (no need to give away industry secrets, just curious). Back in the day, you were an avid collector of hardware synths. Do you still primarily play on hardware? Or has the age of easily accessible software instruments changed your creative process in some way?

Oh, gear talk? This is probably going to be controversial! You are remembering correctly, and during my time in Tokyo, I started to collecti all kinds of hardware (which was dirt cheap at the time). With that said, I’ve gotten rid of almost all of the hardware I’ve collected, as I’ve modeled a significantly large portion of it through my device teardowns, and then re-creations of the hardware via FPGAs.

The hardware that I haven’t modeled yet that I still use, have not-very-good ports for, or wrongly assumed someone else would port to software, include: Chroma Polaris (my absolute favorite synthesizer), Roland JP-8080, Roland MKS-50, and Waldorf Micro-Q. I recently discovered a Vermona M.A.R.S. in my storage closest, which is a ton of fun to play with… just a pain to hook up to my current setup. I think that’s ultimately the biggest reason I don’t use much hardware these days: it’s just so much easier to accurately A/B test multiple thoughts and come up with a better solution.

On the software side, Softube’s Model 84 is mathematically accurate to my Juno-60, so that was the latest thing for me to ditch. We have a great collaboration space here in San Francisco which has a couple Jupiter-8s for me to test, and Tal’s J-8 is close enough to make me never feel the need to make the drive across the bay to record on a live Jupiter-8. I have my own software-based versions that are mathematically equivalent to the Clavia Nord Lead 2, Waldorf Micro-Q, Access Virus, and a couple modern Dave Smith/Sequential Circuits synths that have come across my lab.

So what is life like in the USA for you? How has your location in the world and extensive previous travel, effected your music?

I would definitely say that living abroad has affected and influenced me far more than living in the United States. 20+ years later, I still remember my walking path from Harajuku to Shibuya that would take me past 3 vintage synthesizer stores, and 1 modern store. Being able to play with that equipment really shaped who I am now. Similarly, living in Germany, with the large number of synthpop, EBM, and industrial acts also shaped me quite a bit. When I moved back to America; perhaps that was the reason I retired and was dormant for so long?

Finally, I see that you’ve just released a new single, “Yesterday”. Is there anything special you’d like to tell us about this new piece?

Not really; it’s been so long that I can barely even remember it. I’m trying to get to the point where my releases are planned far in advance, so I do not have to stress so much. I’m presently in the final stages of a song called “Come Back To Me” that releases on February 10th. I think it’s the best work we’ve done so far, and I’m listening to both that and the one that is coming out after it, in my car basically 24/7 lol.

Can totally relate to the in-car checking of mixdowns and the like! Thank you so much for sharing all this today, Adam. We miss you!

New interview has dropped, a friendly chat with our mate Johan Hauck of 2DCAT ! Always an honor to re-connect with artists and friends, and learn about all the magic they've been up to. Enjoy!darkstereo.com/2dcat-sometimes-curiosity-makes-the-feline/ ... See MoreSee Less

There are times when one assesses personal and key moments of the past, and how they’ve effected one’s creative future. One such time for us many a year ago, was...
View on Facebook
· Share

Unexpected. Amazing. A surprise from Benjamin Forrestal as Sleeplab released a new album yesterday! Six years since the last... a long time to wait? Perhaps not, as music this beautiful is to be enjoyed many times over. Well-steeped, like a good tea. Diverse and curious in flavor. We won't say more, but a full review will be forthcoming :-)sleep-lab.bandcamp.com/album/to-the-forest-to-the-end?fbclid=IwAR2bYvcvekVyFN6Rvj-abJ8Rg2rQan7iER...7 track album ... See MoreSee Less