Recently a post from Underground N’ Proud popped up on social media, promoting Brisbane band “Void Matter“. I think it was the artwork which really grabbed me, because who doesn’t appreciate a reddened darkness and mysterious figure emerging from flames? I dove in to give their latest track “Wildfire” a listen…

The influence of many forms of metal is immediate, executed with intense punctuation and wonderfully produced. We just had to reach out and see if the band would be interested in having a chat!

Hi Luke! Thanks for taking the time to have a virtual text-based chin-wag with us mate. How have things been for you and your fellow band members the last few weeks? It has been difficult times for so many in your part of the world with the recent floods, so we really hope that none of you have been impacted too deeply.

To start, are you currently a five-piece? What different creative juices and styles do all your fellow band members bring to the table? I ask because the melding of metal styles in your work is very prominent.

Hey Ivan, no worries at all mate. The five of us have been pretty lucky with only some minor damage to our houses, but driving around the place there are so many who aren’t so lucky. We work together really well, everyone plays to their own backgrounds and strengths. Mikey’s got the analytical mind but always brings the groove, Dizzy brings the riffs with his own touch of craziness, Aaron has heaps of technical knowledge and skill, Crispy belts out the melodies and screams ’til his head explodes but still uses the rhythm from his hip-hop, and we work off each other to bring the energy.

So how did you all come together for this project? I’m curious because it sounds like you all have quite different skill-sets. How has it been for you, trying to keep things moving as a band during all the pandemic-related craziness these last few years? Do you always write material together in-person, or do you tend to share ideas digitally first? Who generally decides on the theme and structure of your tracks?

Crispy, Mikey and our original guitarist Pascal Milios were in a band previously, and when that broke up they needed a bass player and another guitarist. Crispy and I were hanging out and had another music project, so he asked me to play bass. Now we needed a guitar player too, so I asked Dizzy since we had played in bands together in high school, and that was the original Void Matter line-up. Right before the Running Blind EP release, Pascal decided to leave the band and focus on his career and family, so we had these 4 songs and were down a guitarist – enter Aaron. Aaron and I got in touch through a Musician Uni page and saw he could play really well and we hit it off, so that’s been us ever since.

We’ve had a few cancelled tours and shows in the past few years but have been very lucky to be able to play Queensland shows. We’re in the middle of our Wildfire QLD tour, Cairns and Townsville are next, with Ipswich, Toowoomba, Gold Coast, and Brisbane to come. Hoping to head down to NSW, ACT, VIC before the end of the year if all goes well.

Every song is different but generally it’ll start with someone recording some riffs and ideas and sending it through to the band. Then we focus on ones we like and develop them back and forth between home studios and a jam room until we’re happy. The lyrical themes and structure generally come from just whatever Crispy and I feel or visualise from the instrumentals.

We hope you make it to the ACT mate, as it would be great to see you guys and meet you in-person, as there is a very strong and friendly metal community in Canberra and the surrounding region. How have the QLD shows been for you? It must be fun to be back on stage and sharing the result of all the hard work writing and recording your tracks.

Aside from extensive touring, what else do you guys have in the pipeline for this year? Do you always have a few new tracks on the boil, in various states of progress, or do you generally focus on one big release, and then shift into promo and live performance mode?

We’re keen as to come down – absolutely love playing new cities and I have never been to Canberra before at all. QLD shows have had their ups and downs with all the blows to the industry from the pandemic, but people always show up and have a fun time with us, and we’re thankful for that. My favorite show we’ve played in the last few months would have to be out in Emerald. We went there as part of a regional tour with Sentiment, Ancient Remains, and Mergatroyd and mate – Emerald showed up – we had the room packed with headbangers! Such great people with great energy out there. Playing shows is definitely the best part of being in a band. Being able to perform the songs we’ve worked on for ages and seeing the people enjoy it is the best feeling in the world.

We’re always working on something new. Always have at least 4 or 5 songs at different stages and we tend to focus on whichever we feel has the most potential at the time. Even before we released “Everything & Nothing” last year we had a few new ones in the pipeline. We’re hoping to have another song released before the end of this year, ideally around August? We’ll see.

Thank you! Our fans are so awesome and they feel like friends to us. If you come to a show feel free to come say hello n shoot the shit with us. Listen to “Wildfire“. Come see our show. Hell, go to all the local gigs you can! Music is life.

Thanks so much for taking the time to interview me! Hopefully we’ll meet in person later in the year.

Here are all our relevant links: 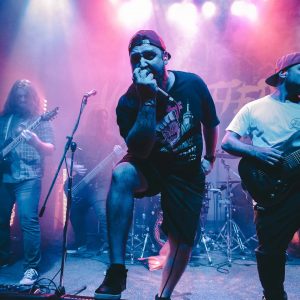