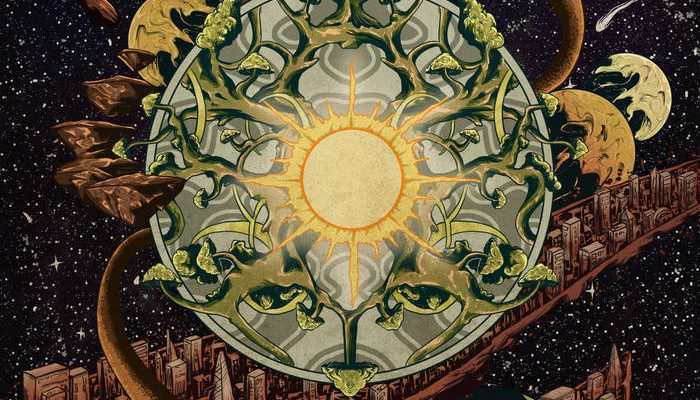 Not so very long ago in late November, Melbourne’s Sleeplab released its new 7 track album “to the forest to the end“. The arrival came as a great surprise; a work that was always hoped for by many and lying on the margins of possibility, yet quietly ambiguous in its progress. Then, all of a sudden, some 6 years since the previous astounding work “low the afterglow“, we are gifted with new music. A sensitive, beautiful and thoughtful return!

I’ll confess the potential for bias upfront. The artist is a beloved personal friend of mine, a collaborator, a musician who has performed at numerous Dawn Industry events, and also given me the honor of noodling a mere arm’s length beside.

Some elements of “to the forest to the end” are as such, known to me, having had the pleasure of learning several sections of a few of the works and jamming within their airy spaciousness. Yet, even with these preconceptions of what a new Sleeplab album might represent and sound like, “to the forest to the end” has left me awe-struck, astounded, and deeply proud. Hearing the final works in sequence and in the context that only a full album can bring, with all the intricacies that come through finalising what represents the enormous hours of a solo artist’s journey, is quite something else. At last, I feel a strange sense of finality in knowing that these musical gifts aren’t for live performances alone, or private pieces that might “one day” see a day’s light. I can’t imagine Ben’s relief in finally reaching permanence with these gorgeous tracks, stamping a mark for an era, and having the freedom to contemplate on what is to happen next.

For those unfamiliar with Sleeplab, this is a hard project to define in words. There is no boa constrictor with genre names tattooed upon its scales, threatening to squeeze this artist into any specific corner. Instead, the music does as Ben almost seems to telepathically will it to do, guiding you through complex undergrowth, cold caves and gritty sand-swept plains. The emotive range extends everywhere between quiet introspection and flares of… not anger, but a deeper form of scalding analysis.

Musically, the works blend “feelings” instead of “styles”, as though the artist has collected significant thoughts and personal events into jars, and then let them steep in the private confines of a studio. That probably doesn’t help me describe this art to a new listener very well, but anyone appreciative of electronic music that makes you “feel”, will hopefully understand. Acoustic guitar, synthesis both gentle and abrasive, delicate background delays with bassy undertones, and Ben’s unique approach to vocals. His lyrics and delivery of song have always been a wonder to me, and “to the forest to the end” is no different. There are moments when the story is cleanly delivered into your ears. Other times, the lines are reverberantly treated and seduce you  from a distance. Up closer and personal, Sleeplab is as equally capable of breathing distortion, grit and all manner of processing directly into your face. This is the beauty of it all, the transitioning between sonic mannerisms as tracks build and flow.

Going further and providing a track-by-track review of the album would spoil the surprise, I think. So instead, we sincerely encourage you to give it a listen. And then another. And then some more. Each and every time I’ve soaked up this release the past few months, there has been something new awaiting. Sometimes a moment of vulnerability, or sadness, or melodic joy. If I had to pick the best albums of 2021, then this would be on the list. Up the top.