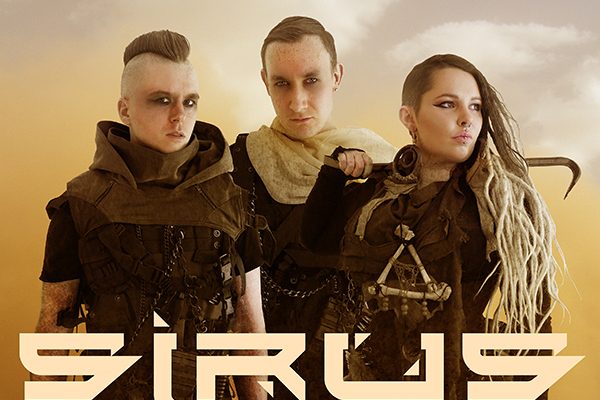 The last few weeks we’ve been having a chat with Josh from SIRUS, a cutting-edge Melbourne cyberpunk music project.

We met many years ago in the early mid 2000’s, if my memory is correct, when you performed as SIRUS at an Enzyme event in Melbourne. I always remember your enthusiasm, love of music, and desire to help EDM’s exposure in the community via clubs etc. This is obviously a long time ago, and since then you’ve produced some amazing music, videos, and been involved in many artistic pursuits. Many, I’m probably not fully aware of, so to start off, please let our readers know what you’ve been up to the last decade, and what the 2020’s is looking like for you!

Yes I remember that gig fondly. I think a lot of musicians end up remembering their early gigs more- because they’re generally more nervous and are still learning about what they want out of themselves and the audience.

Over the last decade, SIRUS has gone through a few different transformations. Especially regarding live performance. It started as just myself onstage, doing vocals and triggering effects. Then the project was briefly a two-piece with a synth player but it quickly became a 4-peice with a drummer and additional fem vocalist. This was around the time we became a signed artist in 2013. I wanted to move forward into that arrangement as a ‘band’ as opposed to a ‘solo act with helpers’.

When we were a two-piece, we had the honor of supporting some of the biggest names in our genre during their Australian tours. This included acts like Combichrist, Hocico and Grendel. During this time we had a bigger focus on controllerism than we do now. We used to come up with lots of different ways of manipulating live audio and assigning those controls to some pretty experimental ‘instruments’ – like a graphics tablet (before touch screens were much of a thing), P5 Data Glove or gyroscope/accelerometer jewellery-like ring. I’m seeing a lot more of this sort of thing now, but a decade ago it was all pretty fresh. When the music I was composing moved further into the ‘songwriter’ domain as opposed to just the ‘dance music producer’ domain, performing more like a traditional band started to make more and more sense.

As a band, we’ve toured the UK and parts of Europe, and shared stages with acts along the lines of 3Teeth, Suicide Commando and Savant. We had announced a 6-week tour of Germany in support of L’Âme Immortelle just before Covid happened- unfortunately that didn’t go ahead. Hopefully people will remember us after this is all over and we’ll be presented with further opportunities!

Outside of SIRUS, I’ve been doing audio production and video work for other acts, and I also started a Drum and Bass side project called DSLAM.

I’ve also been moderately active as a DJ, where I have a pretty tight focus: present aggressive EDM to the wider dark alternative crowd (and much to the chagrin of certain traditional-leaning promoters, I’ve been pretty darn successful in that area… sometimes people don’t know what they want to hear until they hear it!) although if I’m being honest DJing is more of just a fun hobby. In saying that, opportunities relating to SIRUS have translated in to a couple of DJ-oriented trips overseas (Chicago; Manchester), where I’ve been able to present my aggressive EDM leanings to wider audiences.

Right now I am in full-on production mode finishing up our fifth album.

It has been great watching SIRUS’s development and changes over the years, and there is much pride to be had in offering an Australian band on-stage to followers of this genre overseas. How do you think the perception of hard electronic music differs between our humble homeland, and the likes of our European friends? As a collection of experiences, how is all your progress and exposure to date, influencing your new works? A fifth album! You have to tell us more!

There were a couple of things that really surprised me about that area of the world.

Firstly, that much of said music is still rooted in Hardcore and Hardstyle (and Hardstyle-adjacent stuff like Rawstyle, Jumpstyle etc) – sometimes I felt like I was back in 2004 listening to some of those Ministry Of Sound ‘Hard NRG’ compilations! It’s funny, even though that kind of music has Dutch origins, Melbourne really embraced it and went crazy with it in the early 2000s (Melbourne Shuffle anyone?) but we’re completely over it now and have moved on to other things. Music like that is seen as retro here but it’s still quite ‘current’ in Europe, which is crazy.

Secondly, visiting Europe made me realize that Australia is really missing the all-important ‘medium sized’ live electronic music events. We have some cool little underground events, and big EDM festivals, but the content in between is missing. With the exception of the self-ordained ‘bush doof’ crowd, Australia is really lacking in the kind of events where a commercial headliner and an underground band might be on the same lineup. These kinds of events are a great way to draw part of the mainstream into the underground (even if for the sake of pure curiosity) and their absence is a unique hurdle for many live electronic musicians in Australia.

I have no doubt our progress in the scene has had an impact on my songwriting and overall craft, but I’d say a lot of that influence is quite subtle, and most of it I would have a hard time pinning down. Though I can say with certainty that my vocal delivery, both live and recorded, has really benefited from playing a gamut of live shows. Whilst part of the improvement is just practice and confidence, other improvements have been due to experimentation in the right space- both mental and physical. Often when rehearsing with the band, I’ll stumble onto a new way of delivering a phrase, or find parts of my voice that only sound good when I’m being loud, and this sort of thing eventually makes its way into recorded material.

We’re choosing to keep much of the new album a secret until it is ready, but there are a few details I can share. Our last couple of albums have featured, among many other things, a blend of Bass Music and Prog Metal. I think the key word there is ‘blend’. Some of it was so blended some people found it hard to classify- not a bad thing in itself but certainly, for some audiences, it had the potential to detract from what they like about each genre (at least that’s a working theory). So for the upcoming album I have decided to include these sounds but ‘blend less’; meaning the Prog Metal parts are structured more like Metal, and the Bass Music parts have more of the buildups and structure that EDM fans are accustomed to. I’m still exploring a lot of unique sounds throughout the album, but I’m experimenting with having more ‘tell-tale cues’ for each genre as I do so. I’m interested to see if that adds a little more ‘wow factor’ for certain people.

I’m thrilled to hear that you are working on new material, and also balancing different styles/genres into fresh creations. Personally, I can very much understand what it is like to try and produce music that is both accessible to certain realms of music-lovers, whilst also incorporating elements from other cool and modern styles. Can’t wait to hear more about this release when the time comes!

Obviously, the seemingly endless lockdowns in Victoria must have impacted you in many ways. In particular, we were sorry to see that you’d done a lot of work to set up a dedicated EBM club, which now has been delayed. We really hope things improve down there soon, and look forward to hearing about how this new venture goes! Thank you so much for taking to time to write with us mate, and we hope that one day soon we can say hi and see the fruits of your labor in-person!

Yes, delayed but not forgotten! In fact there were 3 clubs playing EBM and alternative electronica in Melbourne, that being Boot Sequence, Kävort and Tronikk; though Boot Sequence was the one looking at putting on live acts. We still hope to play their launch night in December, as it looks awesome. I’d like to give a shout out to everybody currently organising those events: Lewis and co from Boot Sequence, Jae from Kävort and Alex from Tronikk. They’ve all been working hard and I really hope all their events flourish after this whole lockdown situation is over.

Thanks so much for the chat Ivan, it’s always awesome to chat to other musicians about the craft. I look forward to meeting again in real life and things are looking brighter for 2022.

New article! A chat with Sirus. It was really great to spend some time with Josh Rombout and catch up on everything he's doing, and the amazing journey this project has taken, and continues to make! Enjoy :-)darkstereo.com/sirus-wires-code-and-journeys/ ... See MoreSee Less

The last few weeks we’ve been having a chat with Josh from SIRUS, a cutting-edge Melbourne cyberpunk music project. We met many years ago in the early mid 2000’s, if...
View on Facebook
· Share

While you wait for all the interviews and reviews that are currently cooking at darkstereo HQ... if you're a metal fan, check out this Discord group! Found some friendly and like-minded souls therein :) Milo White is working hard to promote Australian metal of many flavours.discord.gg/B7QVGBbn ... See MoreSee Less

Check out the Down Underground - Australian Metal Server community on Discord - hang out with 160 other members and enjoy free voice and text chat.
View on Facebook
· Share